Anti. A set of tools for hacking local networks and computers for Android.

Do you need to find the vulnerabilities of the nearest WiFi network and devices located in it? There is nothing easier - Anti, will make it easy and simple. So began short the note about the new program, with the arrival of which, the time was over when it was necessary to have a laptop with you to test network vulnerabilities. Now all the tools for hacking networks and invading computers are placed in your pocket along with your Android phone. At the time of writing, the above-mentioned notes, the program was not yet available for download, and information about it was negligible. But, a few weeks ago, the Anti program finally became available to owners of Android tablets and phones, and I want to familiarize you with its capabilities in more detail.

First of all, and it will not be a discovery for you, it should be noted that for its work, Anti requires root on your Android device.

After the start, the program immediately starts scanning the Wi-Fi network and all devices in it (computers, routers, phones, tablets). All devices available for invasion in the list that appears on the main screen of the program will be marked with a red dot. A green dot means that the device is active, and a yellow dot means that it has open ports. You can see the results of the network scan in the form of a detailed report right there in the program, or send them by e-mail to the address that was specified when registering the program during its first launch.

After the vulnerable device is detected, you can start testing it more seriously.

By selecting a device, you can attack it by clicking on “Attack” in the menu that appears. As soon as the program gains access to the computer, you get the opportunity to control it, for example, to run a calculator or push the DVD drive tray. 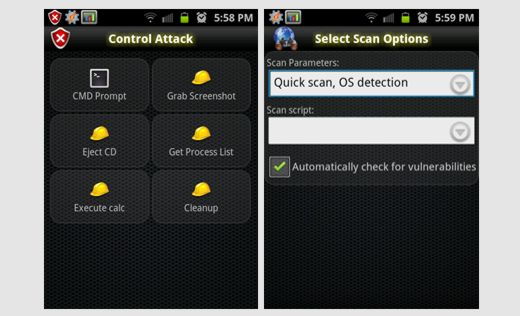 You can also take screenshots of the attacked computer, execute any commands from the command line, shut down and reboot the computer.

In addition to direct attack, you can choose a DoS attack, as a result of which, the computer being attacked will lose access to the Internet.

The “Spy” option allows you to monitor your computer by accessing the images it receives over the network, unprotected logins and passwords, as well as the addresses of sites that its user visits.

You can even resort to the “Man in the Middle” attack, with which you can intercept and substitute for your data transmitted over the network, such as images, messages, and so on.

Using the Cracker feature, you can check your passwords for easy hacking with bruteforce attacks, which will help you get rid of passwords that can be cracked by brute force and using ready-made dictionaries.

If you select Replace images, all images that the attacked computer receives from the Internet will be replaced with images with the Anti logo.

Without a doubt, Anti is a powerful and serious tool for hacking networks, and allows you to test your local network for any vulnerabilities at a professional level. The program interface is quite simple and intuitive, and because of this it is very convenient to use Anti.

However, in order to use all the power of the application, you have to fork out.

In order to be able to take advantage of the man-in-the-middle attack, exploits and plugins, you will need to purchase the Anti Silver version or buy 20 credits that will cost you $ 10.

The Anti Gold version costs $ 50 or 150 credits, giving you the opportunity to use more powerful servers for attacks, which have dictionaries for hacking.

You can download the free version of the program on the Zimperium website, at the link located at the end of the article (click on the qr-code image). There, on the official website, you can purchase paid versions of the program.

As soon as the program appeared in wide access, credits could be purchased using a separate application, which additionally needed to be downloaded from the Android Market, but at the moment, it was withdrawn from there.

Hacking a WiFi network in Android is the opposite. Disconnect devices from the Wi-Fi network using your phone or tablet.

Do you need to find the vulnerabilities of the nearest WiFi network and devices located in it?